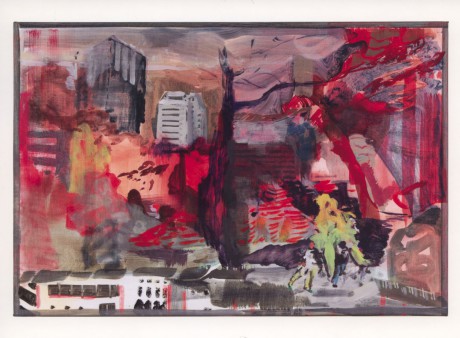 The Falkenrot Prize was initiated in 2005 and it is being presented for the seventh time this year. It is conferred upon international artists who set new standards in contemporary art and painting, in particular through outstanding self-awareness. This year the Prize has been awarded to artist Maki Na Kamura, who lives in Berlin.

Maki Na Kamura comes from Japan, having moved to live in Germany in the mid-1990s. Since 2005 she has been living and working in Berlin, where the gallery DITTRICH & SCHLECHTRIEM presented her solo exhibition Geometry in LD in late 2012. In this exhibition the artist experimented with the powerful nuances of the colour red as well as the balance of structure-generating geometric forms. In 2012 Maki Na Kamura also received the Prix Marcel Broodthaers – en peinture.
A frequently recurring theme in Na Kamura’s works is the influence of western painting on visual clichés in reference to Japanizing landscape depiction. Christoph Tannert, artistic director of Künstlerhaus Bethanien, paid tribute to Na Kamura’s straightforward painterly concept with the following words: “Color spreads itself intoxicatingly in her work. Color creates space, creates landscape, and yet displays itself in the process. The painting doesn’t hinge on the distinction between the abstract and the concrete.” (Catalogue Falkenrot Prize 2013, published by DISTANZ Verlag, Berlin).