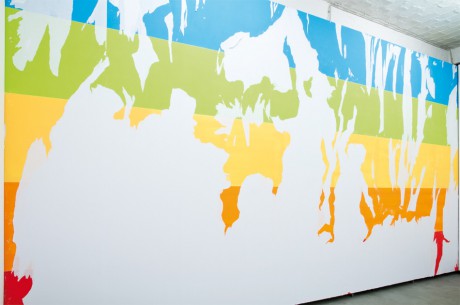 First endowed in 2005, the FALKENROT PRIZE pays tribute to artists at home and abroad whose work seems likely to set new standards in contemporary painting as well as adjacent fields. As in the past, Künstlerhaus Bethanien presents the work of the prize-winner, shown in the form of a comprehensive solo exhibition.
The prize-winner in 2012 is Berlin artist SLAWOMIR ELSNER.
Slawomir Elsner often makes use of photographic originals – for example, he employs images from magazines or photos that he has taken himself – and alienates them, so that usually one cannot discern the images’ origins or what exactly was the basis behind each piece of work. By translating the photos into drawings and also consciously copying photographic blurring or a lack of definition, Elsner takes away the originals’ documentary aspect: in this way he creates a view of people, situations or objects that can irritate the observer. Elsner works with colour and also with drawing pencil. His pictures are finely developed and multi-layered; often, we only notice after more careful contemplation from close-up that these images are not prints. An everyday object or a face is changed by Elsner’s art, so that the people shown become schematic, appearing to be alienated from themselves. What is portrayed develops a disturbing ambivalence. The declared aim of this artistic practice is “to reveal the extent to which images deform reality and develop into completely independent visual facts”. (Slawomir Elsner).