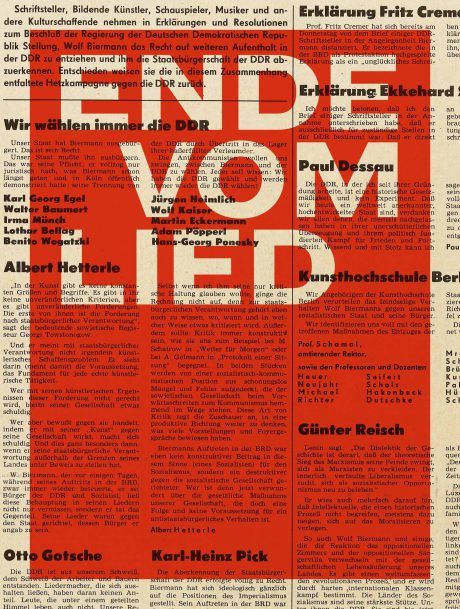 The exhibition Ende vom Lied looks back at the expatriation of songwriter Wolf Biermann from the GDR in autumn 1976. Although that event was forty years ago, memories of the artist’s audacious poems and songs and his courageously expressed criticism of those wielding power in the unjust state of the GDR are still very much alive, even today.
Together with Karl Mickel and Adolf Endler, poet and songwriter Wolf Biermann, born in 1936, is regarded as a shaping influence on many intellectuals and artists of his own and the following generation in the GDR: they opened up wounds and delineated broader horizons beyond the GDR’s provincial ways of thinking.

The exhibition Ende vom Lied presents works by artists who lived in the GDR or who look back on the GDR from today’s perspective with an interest in asking how, as a person with creative potential, it is possible to act critically in face of injustice, taking a stand by employing art against fear-based systems.

Ende vom Lied shows documentation of concerts by Wolf Biermann – before his expatriation in 1976 and directly after the fall of the Wall in 1989 – as well as an interview with the artist reflecting on the events of 1976. In addition, there will be a show of paintings and sculptures that are connected personally to Wolf Biermann: they portray him, pay homage, or examine his role as a communist, poet and social critic. And it will also be possible to see series of photos documenting everyday life in the GDR: public life in the surveillance state, the irrational aspects of a society of shortages, the secret strategies of the state security services. In addition, however, there will be evidence of young people’s and artists’ protest. The works of the exhibition reveal an aesthetic potency that enables them to make clear, on various temporal levels, that everyone may have been faced by ideology all the time in the everyday socialism of the GDR – but that this permanent, meaningless red light could not outshine reality.

The curator of the exhibition is Christoph Tannert; curatorial assistance: Miriam Barnitz.

Ende vom Lied is a project conceived in parallel to the exhibition Voices of Dissent. Art in the GDR 1976–1989 in the Martin-Gropius-Building Berlin, which examines the same theme, showing positions adopting an anti-attitude to the “custodial state” of the GDR. (16th July – 26th September 2016).
Ende vom Lied is accompanied by an extensive catalogue with numerous illustrations and monographic essays on the participating artists (design: Tobias Jacob), which will be available in the exhibition and via Künstlerhaus Bethanien.

The exhibition and catalogue have been realized with generous support from the Governing Mayor of Berlin, Senate Office – Cultural Affairs.

Ekkehard Maaß will be performing songs by Wolf Biermann at the opening event on 14th July 2016.