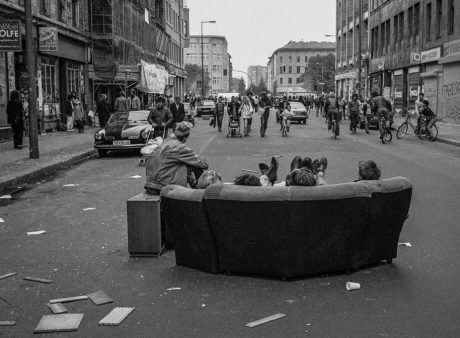 The title of this project, “Berlinzulage”, refers to the extra, tax-free allowance of eight per cent paid to every employee in West-Berlin by the state during the time of the Berlin Wall. In this way an attempt was made to stem the flow of production means and labour force away from the walled-in frontier city, to boost the shrinking economy, and attract anxious capital investment.
On the other hand, the rather desolate state of large areas of the inner-city districts and the retreat of capitalism provided a great number of free spaces which chiefly attracted more unconventional characters to the city. Artists and creatives in particular knew how to utilize the city’s vacant rooms and waste areas during the slump. And so “Berlinzulage” is a fitting name for what may be associated with the situation in Berlin and also understood as added value in retrospect.
The exhibition project aims to track the artistic strategies and tendencies that could be realized easily at that time, in a context that was distant from the market and indeed scarcely regulated at all. They led to a tremendous expansion of the art concept, regarding both places and protagonists, in theory and practice, the conceptual and the Underground.