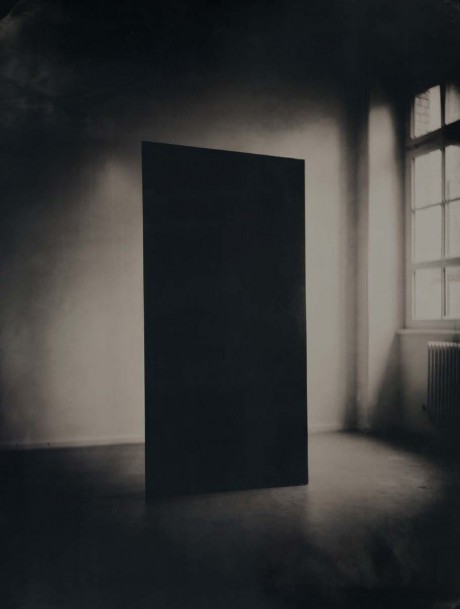 In his work Ben Cauchi creates meticulously composed photographic objects by employing the complicated 19th century process of collodion wet plate photography. First, the artist covers a glass plate with collodion. Then he soaks it in a silver nitrate sensitizing bath, and finally fits the wet plate into the camera. Immediately after exposure, an iron sulfate solution is poured over the plate – a difficult balancing act that leads to the production of direct positive images on the glass. Despite the knowledge that these photographs must have been made recently, initially they may appear to the viewer like originals from an earlier period. But it is not only Cauchi’s creative method that might deceive confusion; the motifs also go further than whatever is superficially visible.
This certainly applies to Cauchi’s exhibition One’s Own Grey at Künstlerhaus Bethanien. The artist refers to the individual, imaginative power of the inner eye. Like the grey colour that the human eye sees in absolute darkness, the viewer of Cauchi’s works discovers unique phenomena in these photographs. He gets us to question our own perception with the veiling and interim spaces he creates, for example, by using heavy curtains under which light can escape. What is concealed behind the curtains? What might have been placed on the pedestal he depicts?
Closely following the concept of studium and punctum postulated by Roland Barthes, the artist questions human awareness – for what he portrays, without doubt, is not what the human psyche believes it can see.