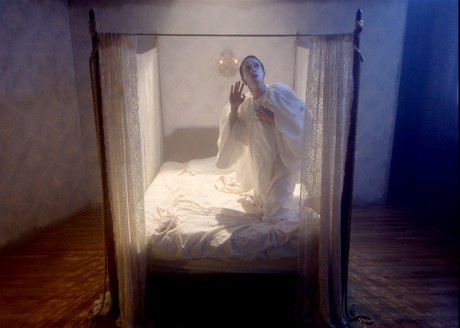 In her cinematic works and video installations, Ann Oren addresses the interdependence of spectating and acting as an expression of current identity, deriving from social media. Oren reflects on questions of interactivity as suggested by platforms such as Twitter, Instagram and Facebook, through a margin of deliberate publicly exposed yet intimate behaviors.
The Supreme Spasm consists of a 4-channel video installation and a series of light-boxes, a cinematic adaptation of Pierrot, Murderer of His Wife, a play written for a single mime performer by Paul Margueritte in 1888, in which Pierrot tickles his wife to death, and ultimately suffers the same fate condemned by her spirit. Pierrot becomes a dupe of his own imitation. Oren focalizes the mime as a synonym for the theatrical moment of current produced identities and their audience apparatus. She expands the blurring of boundaries between reality and fiction from the original play, by connecting contemporary media with historical theater forms, through the use of the mime’s figure, performed by Blake Habermann. She demonstrates the theatrical roots of our self-observant performing ego: “Like the mime, social media users imitate imitation as they stage their own selves.” (Ann Oren).

With the kind support of the Embassy of Israel in Berlin