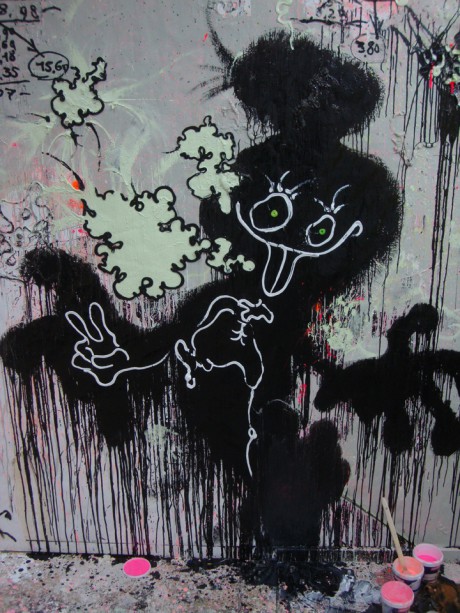 At the beginning of the 1990s, Alexei Kostroma proclaimed a new trend in modern art – the so-called “organic way”, which began in the 20th century Russian avantgarde. Precisely this “organic way”, which investigates the developmental laws of living nature, enabled Kostroma to argue his own perspective regarding the relations between theory and artistic practice in modern art. In his creative work he constantly examines the reciprocal relations between man and nature and allows the insights he gains in this way to flow into his social environment. As an artist he works in a parallel way on several threads of a topic; on the foundation of natural phenomena, he thematises problems specific to humanity as well as the world as a whole.
In his current series of images entitled Anticipation he examines the economic crisis and mountains of debt in the style of Bad Painting. What can be seen is a painterly trip around the world in numbers – revealing his faith in art but certainly not in the vague announcements of economic bosses and the political class. Kostroma spills the mood of the consumers into a wild, furious scenario, whereby people’s intuition matches the frustrating economic data outside Germany.

Alexei Kostroma, born in the city of Kostroma, Russia in 1962, lives and works in Berlin.