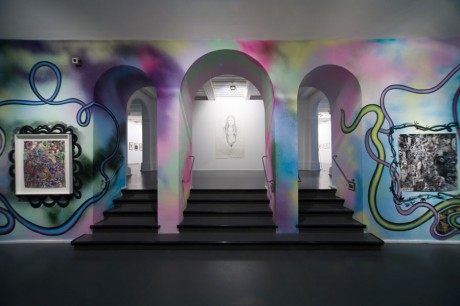 “Against the Grain” is a translation of the French title “À Rebours” of a novel by Joris-Karl Huysman. First published in 1884, this novel’s almost painfully detailed descriptions of the unthinkable obsessions of the overwrought, sensitive young nobleman Jean Floressas des Esseintes made it into a key novel of French symbolism and the decadence movement. Not least, in 1891 des Esseintes was a model for Oscar Wilde’s character Dorian Gray, who was also a dandy epitomising the modern narcissist.

Symbolism and Gothicism are returning. Reminiscences of Romanticism and the Baroque, celebrated melancholy, a tendency to the grotesque and reflections of occult religions are experiencing a renaissance, turning exhibition spaces into the home of witches, monsters and vampires.
One could perhaps even refer to a new mysticism, which has also discovered its own intimate, private medium in drawing.

The fact that this exhibition is called “Against the Grain”, therefore, is to be understood first and foremost as a metaphor of this medium’s individuality and self-will. But the title also holds a wealth of references to a cult book from the turn of the previous century, when Joris-Karl Huysman’s sensationally successful novel “À Rebours”, in English “Against the Grain”, delighted readers with its ecstatic visions of the end of the world.

The new mysticism also celebrates the irrational and may be scrutinised as a strategy of flight. However, its sometimes over-exaggerated aestheticism – which is apparently able to cut out the political completely – is always an additional criticism of the media and a game with social roles and one’s own identity.

Against the Grain includes numerous works by twenty international artists who live in Berlin, or whose work was given vital impulses during their stay in the city.

“Caraota von Moules” is supported by means of the Hauptstadtkulturfonds.