I was looking back to see... 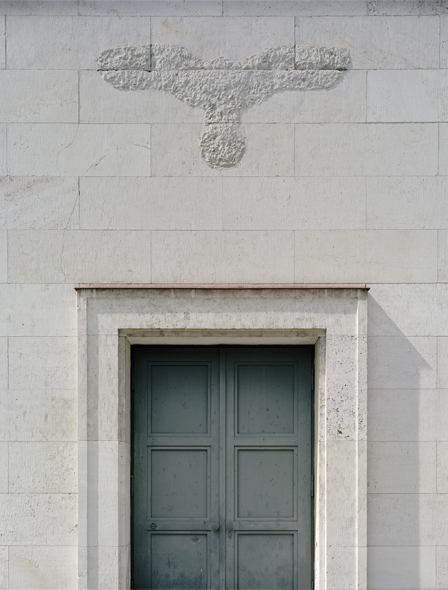 In recent years, Kaja Leijon’s artistic practice has focused on parallel work with film and photography. By subtly exploring the depths between elements and bringing them to light in an almost poetic way, Leijon aims to create fictional narratives and universes in which the viewers are enabled to explore oneselves.
At Künstlerhaus Bethanien, Leijon presents a series of new works created during her stay in Berlin, in which she thematizes the motif of the bird of prey (eagle/ falcon/ hawk), which she repeatedly encountered in many forms during her stay in Germany: the falcon as a masterly flyer, now also at home on the towers of the city; the eagle as an emblem on many flags and coats of arms or German euro coins; the falcon and eagle as architectural ornamental  elements or only perceptible as outlines on historical buildings, from which the sculptural eagle emblem was removed after ideological-political abuse. Leijon’s works fathom the spaces between semiotic meanings, the free life of the wild animal, and the centuries-old symbolic use in heraldry and history, and through the new form of presentation of the motifs she has currently chosen – framed under strong Plexiglas or hanging from the ceiling in a round form – transfers the photographic level into the sculptural: a form of transformation to which Leijon’s current artistic practice is particularly dedicated.
She has also filmed falcons in the village Villa Faraldi in Liguria for several weeks, which together with scenes from natural and societal phenomena, generates the film I Was Looking Back to See if You Were Looking Back at Me to See Me Looking Back at You. The film will premiere at Künstlerhaus Bethanien.

Kaja Leijon, I was looking back to see..., 2019, Künstlerhaus Bethanien. Photo: David Brandt