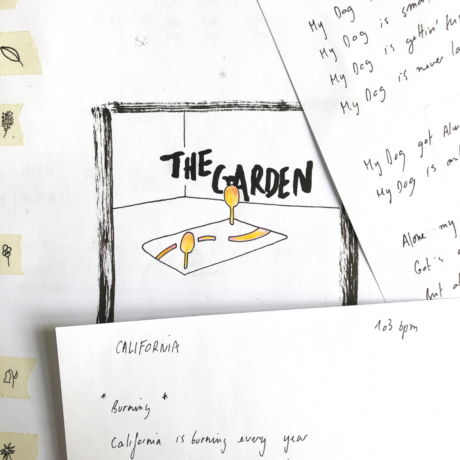 As part of his exhibition at Künstlerhaus Bethanien, Thomas Schmahl will perform THE GARDEN.

In film production, Montage denotes the processing and structuring of the recorded image and sound material in order to give the finished film its final form and create an immersive spectacle. Individual images and different layers of sound are merged and placed in a specific order to create the impression of temporal and narrative continuity. This technique can also be applied to industrial production, music, comics and – in the broadest sense – to the way we manage the continuity of our actions throughout the day, the way we process and assemble various pieces of information to define outlines and systems.

In his exhibition Backing Vocals at Künstlerhaus Bethanien, Thomas Schmahl (b. 1994 in Annecy, France) reverses the process: he disassembles film scenes into their constituent parts and rearranges them in the coordinate systems of classical art genres, thereby disrupting the mechanisms of narrative continuity. We see storyboards of possible scenes for an emerging film. In these endless loops of repetition there is no definite before or after – only a moment. As with a story that we pick up midway through, all the exhibits are in some way inside and outside of a possible scene at the same time. The road, the landscape, the sound of the radio, a pack of dogs: all these elements of a possible plot are continually in motion, forming a universe of numerous probabilities, unsettling our everyday perception and humorously complicating the principle of cause and effect.