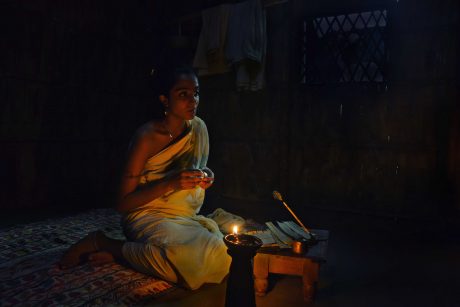 N. Rashed Chowdhury is an Independent filmmaker and film activist living in Bangladesh. He has been involved with Bangladesh Short Film Forum– the pioneer organization of independent film movement since his high school days, back in the early 90’s. Rashed had been an active participant of the Film Society Movement of Bangladesh, initiated during the sixties. He has made couple of short films and documentaries that were screened in various International film festivals. Rashed has recently completed his first feature film Chandrabati Kotha (The Stories of Chandrabati) that earlier won the National Filmmaking Grant for feature film (2014-2015), awarded by the Government of Bangladesh.

Chandrabati Kotha is a tribute to the ballad writing traditions of the 16th century East Bengal: The young daughter of a veteran poet, Chandrabati is in love with another poet Jayananda. On the eve of their marriage, Jayananda betrays Chandrabati and marries another woman in the community. The pain stricken Chandrabati resorts to choosing a passionate life of confining herself inside a Shiva Temple and vowing to rewrite the epic Ramayana. She tries to recall her early writings and decides to transform Sita – the ignored female of the epic – into the main hero. Jayanada realizes his grave mistake and returns to the temple seeking her forgiveness. Chandrabati rejects him and concentrates on completing the ballad of her own conscious. “For her trend setting role in re-writing the Ramayana, Chandrabati is now hailed by scholars as the first feminist writer of Indian sub-continental literature.” (N. Rashed Chowdhury)