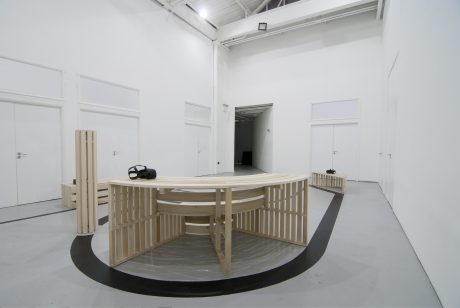 Theodoulos Polyviou (*1989 in Nicosia) is a Cypriot artist based in London. His practice investigates possibilities of marriage between VR technologies, performance and sculpture. Theodoulos is interested in site-specific responses to space and engagement with open forms of audience participation. His current research looks at the ways in which networks and virtual environments play a critical formative role in the constitution of selfhood and desire.

Polyviou’s work is concerned with the digital body, the invisible body and investigates ways in which perceptions of reality can be vastly altered by what is not been seen, defining the unseen as matter with agency. By focusing on the architectural narratives that outline queer spaces, Theodoulos investigates the different ways in which politics and social structures necessitating geographical specificity, translate digitally to produce political disorganisation and discussion and in doing so challenge conception of borders and boundaries.