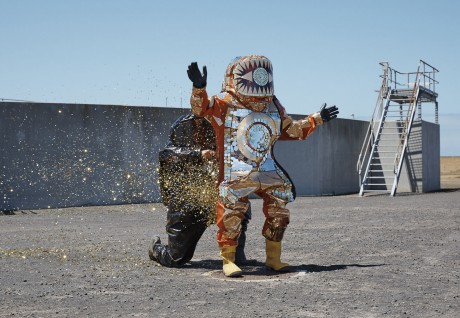 Técha Noble stretches the body beyond its customary confines in her performative work, developing spectacular, ambiguous and sometimes grotesque visions of embodiment. In Noble’s visual world, there is an elasticity to the contents of recognisable forms; while three bodies can become one and go grocery shopping (Walmart, 2014), the hues of the Australian Blue Mountains can be mistaken for the landscape of Florida (The Line from New Smyrna Beach, Florida to The Lyrebird Dell, Leura, 2015). Blending cultural signs and symbols, movement and performance, Noble’s work generates an array of striking bodies that are pleasurably uncanny.

Grantee
Australia Council for the Arts