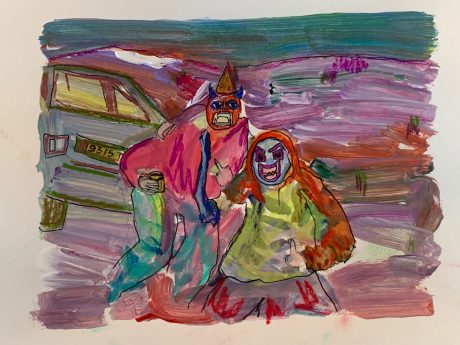 Gaëlle Choisne (1985, FR) lives and works between Paris and Berlin. Sensitive to contemporary issues, her practice takes into account the complexity of the world, its political and cultural disorder, whether it be the over-exploitation of nature, its natural resources, or the vestiges of colonial history, where Creole traditions, myths and popular cultures mingle.

Her projects are conceived as ecosystems of sharing and collaboration, and create places of resistance, where possibilities are created, as for example with the project Temple of Love. Initiated from Roland Barthes’ original essay on love, “Fragments d’un discours amoureux” (1977), Choisne adds a political dimension to the concept of love by valuing and appreciating little-noticed minorities, traumatised identities, and thus disempowered people. Temple of loveis an ongoing evolving project that is constantly redefining itself through its creation and appearance depending on its location and collaborators.

The works of Gaëlle Choisne have been exhibited in institutions such as the Centrale Powerhouse (Montreal), the CAFA Museum (Beijing), the Pera Museum (Istanbul), the MAM – Musée d’art moderne de Paris, Musée Fabre (Montpellier), the Zacheta Gallery (Warsaw), The Mistake Room (Los Angeles), the Bétonsalon (Paris), at Gr_und project space (Berlin), MAMO – Centre d’art de la Cité radieuse de Marseille, Musée des Beaux-Arts de Lyon, etc. She has also participated in a number of biennials such as the Lyon International Biennial (2015), Havana International Biennial (2015), Sharjah Biennial (2017) and Curitiba Biennial (2017). In 2021 she was the recipient of the Aware Prize. In 2019 she was nominated for the Ricard Foundation Prize and the Sam Art Project. Gaëlle Choisne is represented by the galleries Air de Paris, Romainville (FR) and Nicolletti, London (UK).