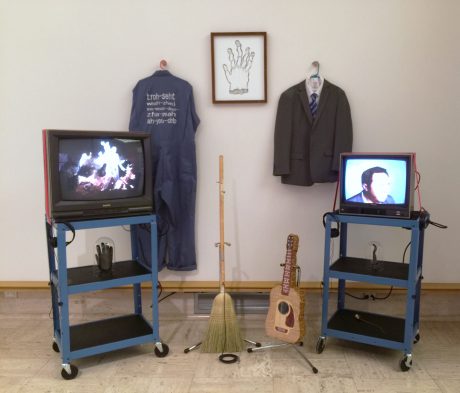 I am half Puerto-Rican and half Filipino, but was never taught Spanish or Tagalog respectively. Because of this, I’ve always experienced language as a kind of landscape of sounds first.
The language that I have been constructing, Spaundou (pronounced “SPAWN-doo”) is a way of recreating this experience for the audience.
Through a mix of music, comedy and genuine appeals to emotion, the inability to understand the language becomes less important when compared with the desire to participate or empathy towards the character. Spaundou is not a simple remapping of sounds to meanings, like Pig Latin. Instead of nonsense, this language has its own sense.
It is a sincere attempt to understand how language creates and changes meaning. For example, Spaundou has grown to the point that many of the words have layers of meaning only apparent to a “native speaker.” Spaundou is also not purely a linguistic exercise. The language is presented by a character that at times appears to be an evangelical preacher, at others a motivational speaker, and at others a failed businessman. These points of access help keep the viewer engaged with the possible meaning.