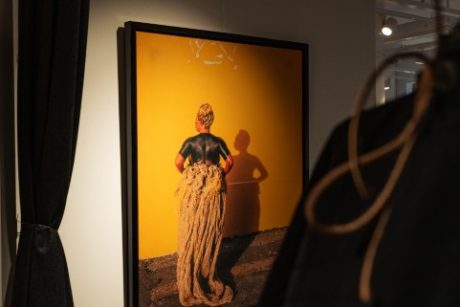 Image: Nicole Rafiki, We went back and fetched it, 2022, Photo: Thando Sikawuti

Nicole Rafiki’s interdisciplinary artworks move between photography and bead work, textiles and text, and the use of memorial objects old and new. Rather than producing finished products as an end result, Rafiki (*1989, Kongo) treats art making as a practice of remembrance, healing and cultural analysis. Her images often employ artistic strategies that avoid a western anthropological gaze. Incorporating symbolism, fables, and tools of visual storytelling and oral history, she invokes themes of forced migration and war ghosts, racialized perceptions of Blackness and femininity, and fraught colonial traditions of spatial power and temporal erasure. As a child of the Kongolese diaspora with connections in various countries in Africa and Europe, she taps into precolonial forms of global interconnectedness and knowledge transfer.

During her residency in Berlin, Rafiki has been addressing Germany’s colonial history and its aftermath. Working with the notion of “looted history”, she turns to the problem of stolen art works and looted cultural objects and the colonial entanglements of art history. What ideas of authorship and ownership are still in play today when the descendants of their place of origin have to pay in order to see such artworks?

Continuing her work on connected global histories and intergenerational forms of remembrance and healing, she also turns to the presence of human remains in German museum collections, hospital archives and universities, which stem from the colonial practice of collecting human bodies under the auspices of research. Here, Rafiki traces how dehumanizing logics continue to operate in cultural institutions today when the bones of ancestors are labeled as “artifacts” or “property”. Using instruments of oral history, she will embody ways of storytelling that account for how things are felt and perceived rather than spoken of using the biased languages of hegemonic history writing.