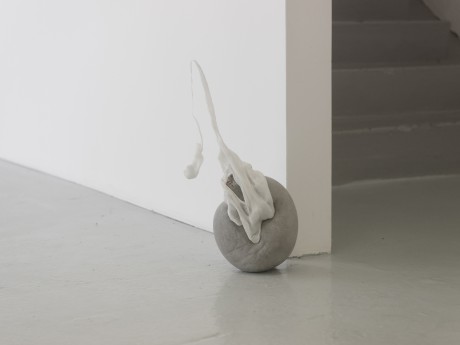 On stretching (1)
Flaccid and enervated the soft, lax wax drapes in an unlikely upward motion.
At a certain wavering pitch it tapers out and descends plummeting downward.
Pummeled almost erotically onto its unlikely companion,
teetering on violence.
Twisted until it cracks.
Undulating under the surface, ridge to furrow, furrow to ridge.
A petrified mass, deporting from tight splash into long lithe solid,
Etching itself into its newfound match.
A limit of discovery, flailing without limbs.
Ripples stretched into dense compound
Sinuous and elongated lines
Humming, reverberating softly as it departs from itself,
in a flakey, messy ending,
by a hot dead weight.

(1) Apparent across all elements of Kox’s practice is the presence of tensile stress; often emphasised
through varying degrees of an object’s abnormality and as an inherent tenet of the material itself. By
way of manipulation the different techniques and processes she employs in the making of her sculptures
ensure that they assume a degree of patent and self-evident agency, whilst testing the limitations of
what is considered visually acceptable. Simultaneously expanding upon the boundaries of our
perceptions, as much as she does the material with which she works. In this way Kox plays a game of
material hyberbole, assessing the nature of matter through the principles of liminality.

Extrait of a text by Dani Admiss