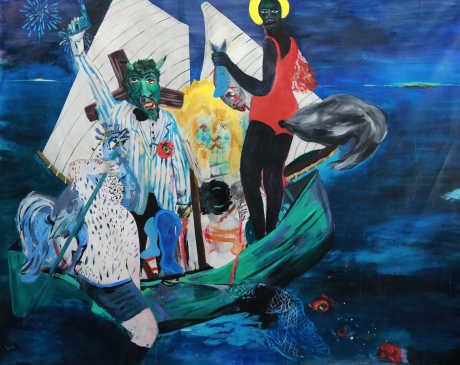 In Sara Issakharian’s pictures, the sometimes-traumatic banalities of life are often met with comedic reflex. Issakharian tries to express precisely these conditions with her multi layered narrative language of painting and drawing. The characters in her paintings are mostly lost in a space that she likes to call” in between”. In between refers to a space that we as human beings yearn for. A safe place of stability, freedom and peace. After moving to America as an immigrant of Iranian Jewish origin, she often feels that there must be a deeper meaning to the place we call home.  A meaning that transgresses borders, nationalities and race.

Issakharian often references old master painting, in combination with naïve child-like drawing.
Her portrayed figures and/or groups often seem lost in dark and light. These visual depictions hope to convey a sense of misplacement. A misplacement of immigrants who left their home and identity behind In search of a new beginning. A misplacement of human in the tragedies of their past. A space that is constantly in between of experienced past and unknown future.

Sara Issakharian (b 1983, Tehran) completed her MFA in painting at the New York Academy of Art in 2015. She was awarded the 2014 inaugural New York Academy of Art Residency in Moscow, Russia and in 2015, she was part of the first-round award winners of the Art Olympia prize, Japan. Issakharian has exhibited her work in London, Tokyo, Tehran and throughout the United States. Her work is included in private collections throughout Iran, Europe and the United States.